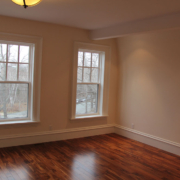 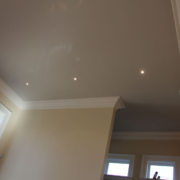 Timeless, modern look: The brick exterior and simple lines nod to the restrained but contemporary class of many upscale homes in New York City

Travelling is food for the soul. Not only does it allow you to see new places, it provides you with a new perspective from which to view the familiar.I was lucky enough to spend some time in New York City this summer and upon my return to Halifax I have been seeing things a bit differently. Not that we can compare a metropolis of more than eight million people to our humble burg of 400,000, however the lens through which I see our streets, storefronts and architecture is slightly different. NYC has an energy and an esthetic that is at once historic and forward-looking. Walkable and urban. Some new buildings are almost indistinguishable from their art-deco era neighbours. Or they are distinct, but it works in its eclecticism.Browsing the recent Halifax home listings (as I do for fun) I couldn’t help but notice 891 Beaufort Ave. It struck me immediately as having that timeless but modern look that would withstand decades of trends, passing them by with its classic lines and ageless style. I was shocked to discover the home was only built four years ago.I’ll let the photos speak for themselves. However I will point out that this chic, understated and elegant home features five bedrooms, five bathrooms, an attached garage, upstairs laundry, soaring windows, breezy open living spaces, a propane fireplace and a large deck and fenced-in back yard. All tucked away among the trees on a quiet cul-de-sac, a minute’s walk from the Northwest Arm.The 3,200 square foot home has many special attributes, but among the most unique is the rare potential for a roof-top garden that peeks over the Arm, as renowned architect Dimitri Procos designed it structurally to support such a delight.Procos (1940-2009), an M.I.T. architectural graduate, taught at the School of Architecture at Nova Scotia Technical College (now Dalhousie) and was the founding chair of the Department of Urban and Rural Planning in the Faculty of Architecture. He was intensively involved in research on energy issues in the built environment. Always a working academic, the Beaufort home was one of Procos’ final projects.The brick exterior and simple lines nod to the restrained but contemporary class of many upscale homes in NYC. The interior decor does the same. In a unique twist, the purchaser of this home will have the option of keeping the furnishings — furnishings styled and provided by non-other than Colin Blanchard and Kenneth McRobbie of 31 Westgate.Using natural materials, traditional craftsmanship and furnishings with timeless lines, Blanchard and McRobbie interpreted the mood and feeling of the architecture and filled the Beaufort space with pattern, texture and colour that is a benchmark for unassuming sophistication.Built by Provident Homes, the home captures that same understated, enduring style I witnessed in New York. Yet it’s surrounded by the peaceful beauty of the Halifax peninsula. Furthermore, it is smack in the middle of the Halifax Urban Greenway.Taking a nod from such cool initiatives like the Highline in NYC (www.thehighline.org/) the Halifax Urban Greenway is a community organized concept for a multi-use trail in peninsular Halifax, closely following the CNR alignment from the Chain of Lakes Trail on Joseph Howe Drive to Point Pleasant Park. The project will preserve green space and natural habitat running through the city, allowing people to walk, bike and jog the trail. A one-kilometre section along Beaufort Avenue between South Street and Marlborough Woods/Roxton Road has been completed.The home at 891 Beaufort is listed for $1, 289, 000 — a comparatively low price that would make those from other cities drop their jaws. The value lies in the home’s timeless qualities, unique architectural elements and of course, the location. What a gem to find here in the city.
Debra Wells-Hopey is a philosopher by training, teacher by trade and writer by chance. She loves her cats, kids, husband and a good marathon — on TV.